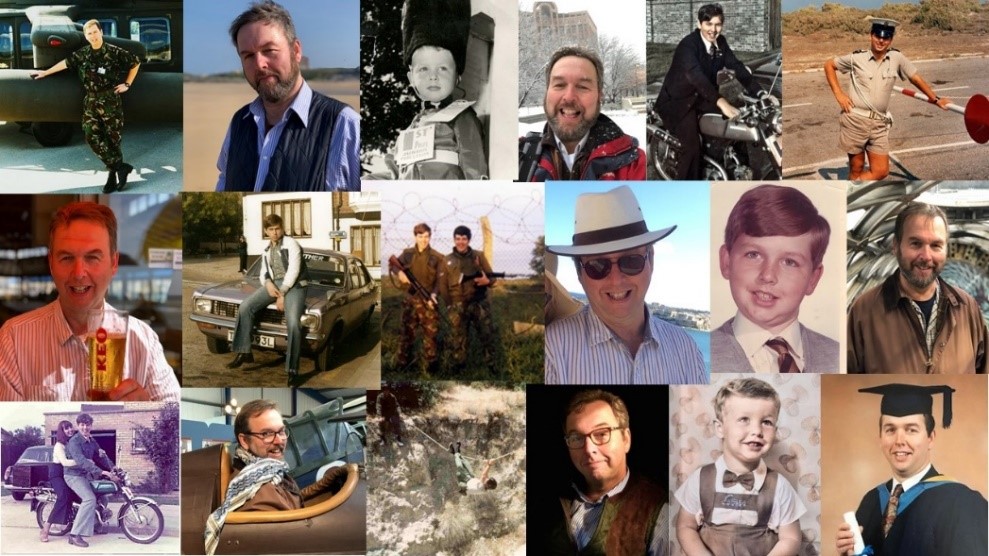 I was born in my Grandmother’s house in Leigh-on-Sea in the county of Essex (yet I have never owned a ford Capri!) in-between overseas postings. My father was ex-wartime aircrew and latterly worked in RAFP/Counter Intelligence, completing 34 years RAF service and my mother was a Maltese national. They met and married in Malta after the war. I spent much of my childhood on various RAF bases including Berlin and Cyprus (2 tours) and attended a number of service and civilian schools. I have two older Sisters both self-employed and now semi-retired. I learned to shoot straight and fly gliders as an air-cadet, how to map-read, and survive outdoors in the cubs/scouts (Berlin, Cyprus and UK) and have always had an interest in history/archaeology. I also learned to distance swim/spearfish as a teenager in Cyprus.

I joined the family business (RAF Police) after completing my GCEs (too many teenage distractions such as girls/motorbikes to do very well, but still manged to pass 5 GCEs!) and served in Northern Ireland, Cyprus, and Germany, as well as a number of UK stations and operational detachments (Bosnia/Croatia/Italy/US). I served in the RAF for 23 years, spending the last 12 working in various roles within Counter Intelligence/Computer Security and completed an RAF funded Computer Science degree with the Open University. I was involved in a number of significant MOD security investigations (OP Stables/Gulf War 1 lost TS laptop/Lost TS docs/Crypto and early computer virus investigations). My last posting was as the Station “Sheriff” (chief of police and security) at RAF Odiham in Hampshire.

After leaving the RAF I joined global IT Managed Services Provider Computer Sciences Corporation (CSC) as an IT security consultant. I worked on most major CSC customer accounts in both technical security and compliance roles and joined the CESG Licenced Advisor Scheme (CLAS), completed CISSP, ISO-IEC 27001 and ITIL qualifications. The CSC accounts I worked on included URENCO/BNFL/BAE systems/SELEX/MBDA/Alenia Marconi/NHS/IPS/Dept of Health/DBS MOD etc. I also led/supported security input to many enterprise MSP bids including DIIF, National ID card and DBS MP&V (JPA) and was promoted a number of times to senior security consultant/ account security manager/cyber solution director. I left CSC after it merged with HPES to become DXC.

For the last 2 years I have been developing a global SOC service capability (technology/processes/resource and facilities) for OneWeb Telco/Satellite company based in the UK and US. Most of the work was completed (74 out of a planned 300+ functional satellites in the sky and all managed securely via 5 earth stations) and final stages of global security operations services capability development/recruitment when COVID-19 struck and the investors pulled the funding.

In my varied career I have covered most aspects of security from physical, personnel and document security to early computer security and later IT security compliance and technology, including managing enterprise security architecture. I have completed security and criminal investigations and have also established and operated a number of security operations service capabilities. I am now looking forward to the next part of my career working in the Arcanum Cyber Security team.

I live in Northern Hampshire with my wife (retired special needs/music teacher) and we have 2 children: Vicki lives in Sussex and is a children’s author/illustrator and Alex lives in Herefordshire and is a senior engineer for the RNLI. We have 3 grandchildren. We eventually have plans to move to Malta (with Maltese nationality) once COVID and the world calms down.

Hobbies – I have taught leadership/ D of E expedition skills to air cadets (stopped at the moment), collect some antiques, research/excavate and published articles/give presentations (book in draft) about aircraft crashes. I collect and restore vintage motorbikes and cars. I still swim 1-mile sessions each week (once the local pool re-opens!).